Media = Art + Message #3 ー Thinking of life’s interconnectedness, the universe and us

Faced with deepening divisions and strife among mankind, more frequent natural disasters as climate-change accelerates and ever-growing floods of refugees, what can we really do to make a difference? Through art I am attempting to show that it is more important than ever, for us to realize that we all are one and that everything and everyone is interconnected

Our latest exhibition, ”Road of Light and Hope: National Treasures of Todaiji Temple, Nara – Photographs by Miro Ito” concluded on 28th June 2017 at the Japan Foundation, Toronto, after a successful 3 month run from 15th March. The next venue will be the Japan Information Center at the Consulate-General of Japan in Chicago from 1st to 28th Nov. 2017

With the special assistance of the Todai-ji Temple, and co-organized by the Japan Foundation Toronto, Media Art League and Japan Camera Industry Institute (as well as Japan’s Consulate-General in Chicago [from 1st Nov. 2017]), this exhibition attempts to share the universality of the ancient teaching that we ourselves are the universe.

Reflections on the flow of life…

Although, the scale of the universe is beyond our imagination, once we realize that our bodies are unto themselves a microcosm containing a universe in each of their tiny constituent cells, the universe’s interconnectedness becomes more tangible.

Through this awareness we might end up with an alternative option: to consider the living universe (including Mother Earth that supports all life activities) as synonymous with our own “life”, and respect it and live in harmony.  Or to continue to essentially see this green planet as a “resource” to exploit, pollute and ultimately devastate. Needless to say, destruction will in turn only bring disharmony to our earth and interrupt the circle of life.

Rightfully, one is all and all is one, a holistic notion is postulated in the Neoplatonic philosophy of ancient Greece. In the common way, the teachings of Kegon-kyo (Japan’s iteration of Hua-yen Buddhism), that form the spiritual foundation of the Great Buddha Statue being erected in Nara in the 8th century, tells us that an infinite universe of galactic proportions is contained in an infinitesimal one.

Once we realize of that everything is interconnected and cyclical within life’s flow of the universe, the awareness of such issues as environmental preservation and climate change grows, in addition to overcome segmentation on the global level.

Chicago-bound — after successful conclusion in Toronto

On the occasion of the Artist’s Talk, 26th May, the auditorium of the Japan Foundation Toronto was filled and three movie shorts of mine were shown, such as “The Great Buddha Lives!”, “Life of Masks, as well as “Gigaku: Road of Masks”. With the people present on this occasion, I could share the message that we can learn from the spiritual heritage from the Silk Road transcending 1300 years of time and space; all is one, and all is interconnected.

Hopefully, visitors will attain a new awareness for the common origins of sculpting as seen in Japanese National Treasures of 1300 years ago and in Hellenistic art in the eastern Mediterranean and Mid-Eastern world around 2000 years ago.

While expressing my heartfelt gratitude for all supporting entities as well as visitors to this touring exhibition series, starting from the UN Headquarters in NY, via Academy of Arts of Uzbekistan, the Council of the Europe (and the Lieu d’Europe), and for its new success in Toronto and then goes to Chicago, I truly hope we can work together towards the idea of a unified world, to which my art activities have been dedicated for the last 16 years since the 9/11 that I experienced in NY.

Hopefully, a time of unity will finally come after so much turmoil in the universe and amongst humankind: between humankind and nature, between human and human ….

The official press release for the next exhibition in Chicago will follow shortly. 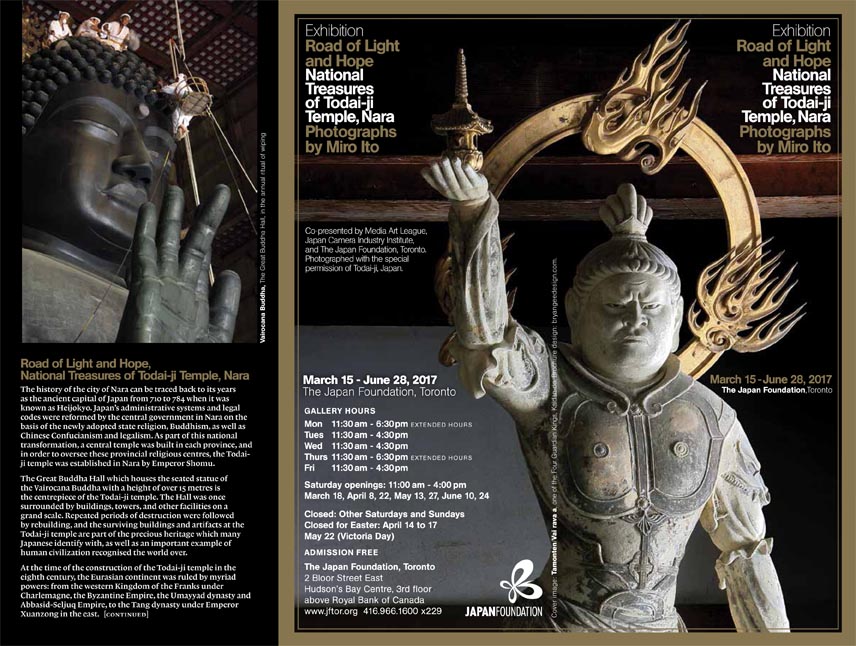