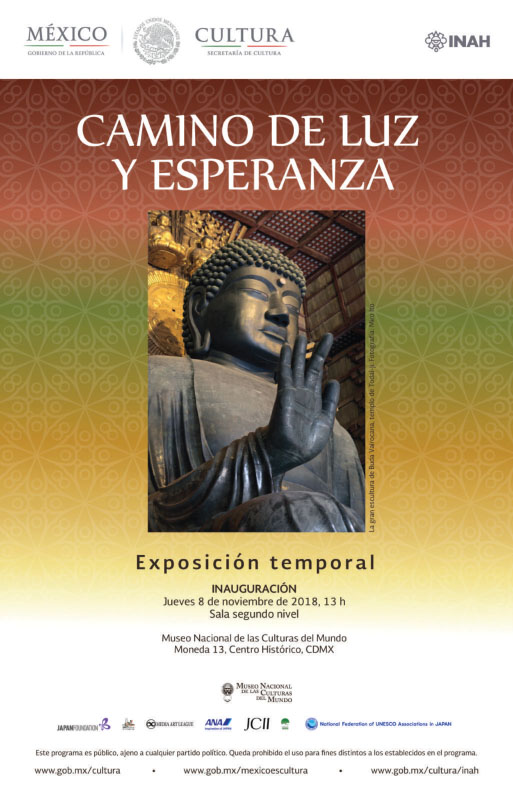 Not only calamity and blight, the roots of war and poverty, but also imminent issues like the increasing tendency of social, regional and global fragmentation, or environmental pollution and global warming, cannot be frozen in time. They must be addressed now and we must treat the Earth as if it were one precious life and foster solidarity by truly empathizing with each other.

To determine our future is to act with sympathy; being part of the problems, we now must be part of the solution. Even though the empathy of one individual may only be a tiny ripple, it can resonate through the whole world as through a tuning fork…

Just as a pebble exists on the ground, so does a star in the cosmos. A pebble, star, plant, animal, or human, all complement and support each other as fellow travelers. This Weltanschauung universally permeates East and West, North and South…

“Split a piece of wood and I am there, Lift a stone and you will find me” (Jesus, in the Gospel of Thomas, Nag Hammadi Collection)

This common wisdom of West and East should be the guideline of our actions with   empathy for all forms of life on our Blue Planet, where a speck of dust as well as the endlessly vast universe can both be regarded as ONE.

“All is one and one is all”

With the kind support of the Japanese Ministry of Foreign Affairs as well as the Japan Foundation, following the invitation of the “Road of Light and Hope” exhibition series to various events or cultural institutes commemorating milestones in Japan’s relations with other nations, it is a great honour for me to have growing speaking engagements in those contexts. (*co-organized by Japanese overseas missions, the Japan Foundation, Media Art League, Japan Camera Industry Institute, etc.)

What began with a speech at the Council of Europe in 2016, is continuing with “Artist’s Talks” at the Japan Foundation Toronto, workshops at the University of Chicago, lectures at the opening event of the “Japan Month” in Rio de Janeiro and in Mexico City in November 2018…

My recurring themes are from Eastern Kegon (Hua-yen) philosophy which has much in common with Western Neo-Platonism including the notion that “All is one and one is all” that the universe is “one living entity” and that there is sympathy (συμπαθεια) within everything (Neo-Platonism).

In order to inspire such sympathy between East and West, my intention is to focus —via photo exhibitions, movie screenings and lectures— on select ancient tangible and intangible World Cultural Heritage of Japan, which reflects the legacy of Hellenistic cultural influences in Nara.

Showing photographic art work of outstanding National treasures of Japan and  Important Cultural Property, that can be traced as far back as 14 centuries ago, as “evidence” to connect the cultural origins of West and East transcending the Silk Roads, our activities are intended to convey the message that we all are one and all is interconnected.

In July, I had the honour of holding a lecture with short movie screenings at the opening event of the “Japan Month” at the venue of my “Road of Light and Hope” exhibition (Cultural Center Correios Rio de Janerio) in commemoration of the 110th anniversary of the Japanese immigration to Brazil.  After the event, the former American Consul General expressed her sympathy for my message which she took as an inspiration. Moreover, what I experienced at the Rio de Janeiro State University enhanced my conviction on the importance to point out the ancient cultural interrelations of West and East. In the end, the “Japan Month” in Rio had 62,000 visitors over three and a half weeks. 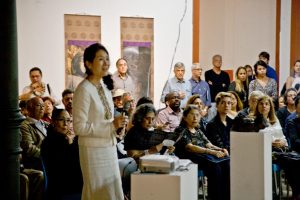 Lecture at the opening event of “Japan Month” in Rio

On 8th November 2018, the memorial event to commemorate the 130th anniversary of the establishment of diplomatic relations between Japan and Mexico was held at the National Museum of the World Cultures in Mexico City. This event is showing Japanese   culture in an extent as has not been seen in recent years. As my “Road of Light and Hope” exhibition was also invited, I had an opportunity to speak, following introductions by Japanese Minister to Mexico, Ryosuke Kuwana as well as Ms. Naoko Sugimoto, Director of Japan Foundation Mexico. On the following day, I held an affiliated lecture to the exhibition at the Museum Library. The chain of sympathy will hopefully extend further to Mexico via this exhibition which still runs until 3rd December 2018)…

Connecting ourselves with the history of East and West, and with the sympathy of and for the globe… 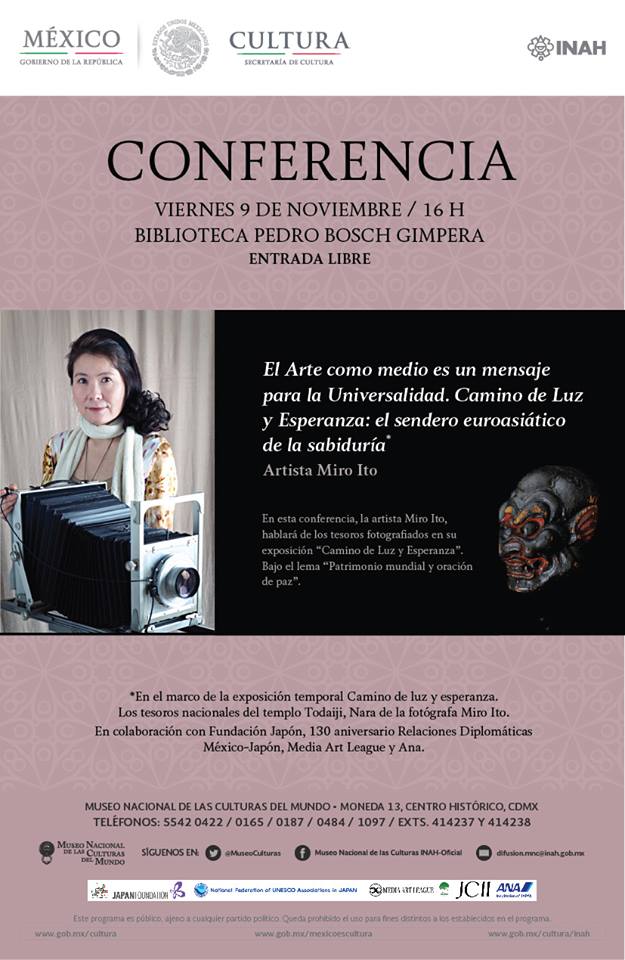