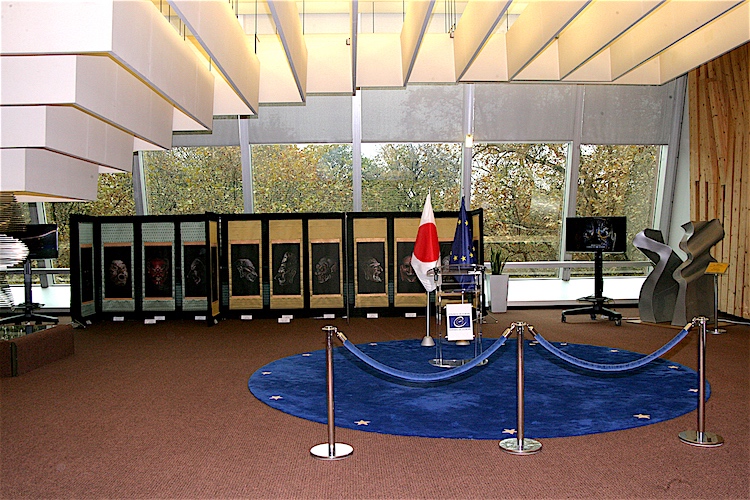 Exhibition: “Road of Light and Hope” at the Council of Europe (Co-organized by Consulate General of Japan in Strasbourg, Media Art League, Japan Camera Industry Institute)

On the morning of 9th November 2016, when the outcome of the 2016 U.S. election could no longer be denied, I was in Strasbourg where I had the honour of holding my touring exhibition “Road of Light and Hope” in commemoration of the 20th anniversary of Japan’s attaining Observer Status at the Council of Europe (CoE), one of the leading organizations for human rights, democracy and rule of law*.

At the ceremony, current Consul-General Shinsuke Shimizu (Japan’s “Observer-Envoy” to the CoE) as well as CoE General Secretary Thorbjørn Jagland acknowledged Japan’s commitment as an Observer over the last 2 decades.

Come to think of it, 27 years ago on the 9th of November, I personally experienced the opening of the Berlin Wall —which eventually led to its complete demise only a few months later— while visiting EAST Berlin. That event triggered the beginning of the end for Communism and the de facto democratization of Eastern Europe as well as hastening the collapse of the USSR. Since then, “democratization” has very much become a key word of our times…

Kristallnacht – The Night of Broken Glass

Looking back almost half a century to 1938 on that same day brings us to the ignominious Kristalnacht (Night of Broken Glass) in Germany, a nightmare that was a harbinger for far worse still to come. This pogrom sanctioned by the Nazi regime left 276 synagogues and approximately 7500 Jewish-owned business establishments/properties destroyed in the Third Reich. Almost 30,000 German Jews were arrested and sent to concentration camps, most of whom were later released contingent on their willingness to emigrate to other countries.

Nonetheless, the Kristallnacht represents a watershed moment in Nazi Germany’s persecution of the Jews that would reach its tragic zenith during the soon-to-follow 2nd World War. https://www.ushmm.org/wlc/en/article.php?ModuleId=10005201

Unity and solidarity have never seemed more important than now.

After being exhibited at the Council of Europe, my exhibition “Road of Light and Hope” moved to an exhibition pavilion at Lieu d’ Europe (also in Strasbourg) from 19th November to 16th December.

Strasbourg (or Strassburg) is ideally suited as a venue, because this once German city, which changed hands numerous times over the centuries —although nominally French— now is a melting pot of Franco-German culture located directly on today’s border between the two former arch-enemies; in fact, it is a symbol of the friendship and close ties enjoyed between contemporary France and Germany.

Both countries have sworn to not allow this city to become a bone of territorial contention ever again and it will hopefully remain as an enduring symbol of solidarity for the entire world.

With my prayers for the unity of East and West …

*The Council of Europe is one of the leading international organizations advocating regulations & standards for the international community pertaining to human rights, democracy, rule of law, etc.; a total of 47 countries —including Russia— are currently members.