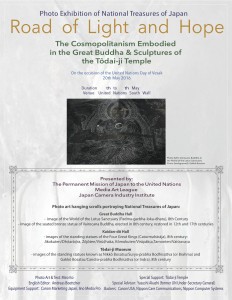 (※this presentation is primarily for the UN representatives/staff)

This exhibition of photographs of Japanese National Treasures, entitled “Road of Light and Hope”, is being held on the occasion of the United Nations Day of Vesak, an annual celebration of Buddha’s birth which falls on the 20th of May in 2016. The exhibited photos portray the most prominent National Treasures of the Tôdai-ji Temple, where the Great Vairocana Buddha was erected by Shômu Tennô (701-756), which today constitutes part of the UNESCO World Heritage Site: Historic Monuments of Ancient Nara / Heijô-kyô (Japan’s Imperial capital from 710 to 784).

This photo exhibition is a tribute to obscure historical exchanges between numerous ethnic and religious groups, philosophies and teachings, art and artisanship as well as diverse folk cultures of the Eurasian continent. Amid today’s ongoing religious divisions and clashes as well as the countless –seemingly endless– conflicts, the Eurasian history of interactions might hold a key for bringing the world together…

Origin and Symbolism of Vairocana Buddha

The origin of Buddhist statues can be traced back to ancient times when images of Buddha with Greek-like features appeared in the Indian cultural sphere (primarily the Gandhara region of today’s Pakistan) around the 1st century BC. These figures’ external appearance was influenced by Hellenistic culture which appeared after Alexander the Great’s expeditions into Asia (334-324BC). Statuesque human-like figures of Buddha originating from ancient Greece spread from Gandhara or Mathura (in today’s India) all the way to East Asia via Central Asia together with such religious sites and monu- ments as cave temples and stupas.

The origin of the Vairocana Buddha (**) of the Tôdai-ji Temple being shown in this exhibition can be traced back to such practices. Concurrently, the Great Vairocana Buddha Statue visualizes the teachings of Hua-yen / Kegon Buddhism: vistas of a boundless universe are engraved on each of its pedestal’s giant lotus petals.

The statue embodies the tenet “All is One and One is All” where infinity can be contained in the Infinitesimal, and the maximum can be reduced into the infinitestimal, akin to neo-platonist philosophy (3rd-6th century) in ancient Greece.

Moreover, the Vairocana Buddha seated in the lotus position of enlightenment symbolizes the interdependence as well as interconnectedness of life and the universe.

(**) Erected in the 8th century, restored in the12th and 17th centuries 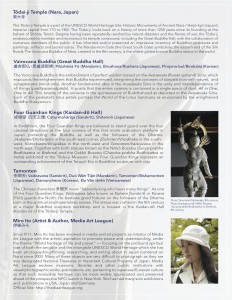 Also known as the easternmost end of the Silk Roads, Heijô-kyô (today’s Nara) was a capital along the lines of Chang’an (the Imperial capital of Tang Dynasty China) with a flourishing cosmopolitan culture accentuated by various cultural relics from the Eurasian continent. Nara preserves many examples of cultural heritage that have been lost in other countries. Particularly the numerous treasures of the Shôsôin Repository (*) of the Tôdai-ji-Temple show the very essence and variety of sophisticated Eurasian culture 1300 years ago. In the Tôdai-ji Temple, around the same time when the Great Buddha Statue was erected in 752, masterpieces of Tenpyô Era sculpture with their lifelike features brimming with vitality and wisdom were created in the major Buddhist sculpture workshop.

Upon examining these Tenpyô Era sculptures, a similarity with ones from the Italian Renaissance (14th to 16th century) in which a revival of Platonism provided a philosophical basis for the arts and cultural activities in general to set free its humanity — accompanied by a respect for individuality in line with classic Greco-Roman culture. In Tenpyô Buddhist sculpture, regarding any of their realistic ―yet idealistic― physiques and lifelike expressions, their roots in ancient Greek culture become evident.

Cosmopolitanism as Proof of Ancient Interchanges between East and West

With the special cooperation of the Tôdai-ji Temple, this photo exhibition introduces the Statues of the Four Guardian Kings (Caturmahārāja) in the Kaidan-dô Hall (Kaidan-in) ‒ together with the pair of statues known as the Nikkô Bosatsu (Surya-prabha Bodhisattva or Brahma) and the Gakkô Bosatsu (Chandra-prabha Bodhisattva or indra) exhibited in the Tôdaiji Museum ‒ which represent the most outstanding achievement of Tenpyô Era Buddhist sculpture with clay. These figures of cosmopolitanism are evidence of ancient interchanges between East and West, along the Silk roads.

As expressions of light and enlightenment can be reached by disciplining one’s mind and body, they are found in much of the cultural heritage around the globe, transcending differences of time and culture.

By exploring ancient cultural heritages along the “Road of Light and Hope” connecting the western and eastern reaches of the Silk Roads, this exhibition casts a light of hope for global solidarity and therefore, towards true cosmopolitanism.

Exhibits of photo art works in traditional hanging scroll style are being created by Miro Ito who, after experiencing 9/11 in New York firsthand, has been pursuing themes of the World Cultural Heritage and National Treasure in Nara, aspiring to serve as a bridge of the heart and mind between East and West. Starting from the United Nations Headquarters in New York, this photo presentation will be shown around the globe by co-organizers, Media Art League and Japan Camera Industry Institute, in Tashkent (Tashkent International Biennale of Contemporary Art), Strasbourg (exhibition at the Council of the Europe organized by the Ministry of Foreign Affairs of Japan), Athens, Tokyo, etc.